The Basketball Museum of Illinois is proud to announce that Toni Marie Wudtke is our 1000th museum donor. If her name rings a bell, it should. Toni Marie is the daughter of Chuck and Anita Rolinski. It was Chuck's dream that the Illinois Basketball Coaches Association would have a basketball museum to tell the stories of our great players, coaches, teams, media , officials and friends of Illinois Basketball. When we got to 999 museum donors, Toni let us know she wanted to be that 1000th donor. Thank you to Toni and all of our museum donors for your great support.

On September 6, we recorded our 64th oral history for the museum.  Participating were Rich Falk, Rick Lopossa, Dave Downey and Bill Small.  Conducting the interview was Jim Sheppard.  All of them are IBCA Hall of Famers.  The University of Illinois also came out to record this interview for their archives.  Each of the players spoke about the influence their families and coaches had on them.  They also spoke of their college playing days (1960-63) and other great players in the Big Ten.  One of the stories we recorded was the first game played in the Assembly Hall (Northwestern vs. the University of Illinois) and last game played in Huff Gym (Wisconsin vs. Illinois).  Rich Falk and Rick Lopossa still hold Northwestern scoring records and Dave Downey's 53 point game is still the record for the "Fighting Illini".  Bill Small had a great chance to make the 1964 United States Olympic Team until an arm injury sidelined him.
The interview concluded with their discussion on how the college game has changed  since their playing days.  It was a great afternoon of stories, but even better than the stories was watching how these "old rivals " enjoy their friendships.  It was a great example of how Illinois Basketball develops lasting relationships.
You will be able to read more on this special event in our next museum newsletter (coming out in October).

The Basketball Museum of Illinois held three golf outings this summer to help with our fundraising campaign. These events were held throughout the state in Pontiac, Granite City, and Winfield. We would like to thank everyne who came out to support our museum! 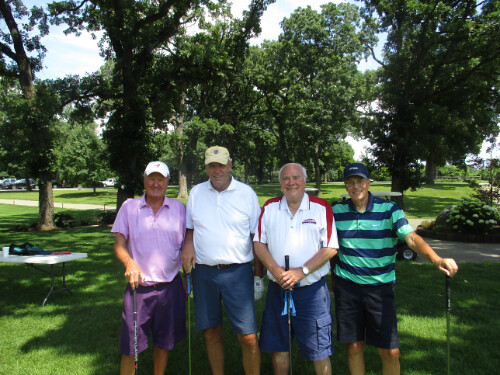 Bob Ward and Bruce Firchau traveled to Loyola University, April 11, to meet with Sister Jean. The purpose of their visit was to present to Sister Jean her congratulatory letter on being inducted into the IBCA Hall of Fame as a "Friend of Basketball" for the class of 2018. Sister Jean also had a chance to see our basketball museum portfolio. It was a fun forty minutes and we are grateful to Ryan Haley and Bill Behrns for making this visit possible.

Recently IBCA Hall of Famer, Mannie Jackson, held his third annual Fundraising Dinner in Edwardsville, featuring Naomi Tutu as the guest speaker. Mannie has given back to the Metro East Region over the years through his Center For The Humanities Foundation. Over the years Mannie has emphasized the "Four Pillars to his Foundation; RESPECT, DIGNITY, UNDERSTANDING and FORGIVENESS". Mannie is to be commended for finding solutions to our societal problems. Ed Hightower is also a vital part of these wonderful outreach programs and we are proud of your efforts.

Also in attendance: The Greatest American Female Athlete of All Time from East St. Louis, Jackie Joyner Kersee with Bruce Firchau, IBCA Museum Chairman. Jackie made the winning shot at the horn in 1980 to defeat Chicago Marshall for the State Championship. Jackie went on to star at UCLA in basketball and track. She won 2 gold medals, 1 silver and 2 bronze medals in the Summer Olympics.

Dick Vitale visited Pontiac, IL on September 7th to speak about the Jimmie V Foundation and to promote the Basketball Museum of Illinois. The night saw over 200 guests come out to hear Mr. Vitale's presentation and to support the Museum. Please check out the information below!

On August 10th, 2017 officials from the Illinois Basketball Coaches Association and the Basketball Museum of Illinois honored Chicago Bulls and Chicago White Sox Chairman Jerry Reinsdorf for his induction to the IBCA Hall of Fame and his tremendous contributions to the game of basketball in Illinois. IBCA Executive Director Jim Tracy, Museum Chairman Bruce Firchau, IBCA Hall of Fame Coach John Quinn, and former Illinois Governor Pat Quinn, and others were in attendance for a great night!

Pontiac
The 2nd Annual Basketball Museum of Illinois Golf Outing was held on July 10, 2017 at the Pontiac Elks Country Club and it was a huge success. Special guests Steve McMichael, Emery Morehead, and Jim Morrissey from the 1985 Chicago Bears team and Phil, Paul, and Rob Judson were all in attendance. There were high school coaches from Galesburg to Chicago in attendance as well.  Chicago Playground Legends Executive Director Josh Smith also spent the day in Pontiac golfing and meeting many new people. Over 175 IBCA coaches, referees and fans enjoyed a day of golf and fun. The day started out rainy early but cleared up in time for everyone to tee off and enjoy a day of sunshine and warmth.

The 2nd Annual Basketball Museum of Illinois Golf Outing was heavily supported by the state with 31 hole sponsors. StillHouse Whiskey, Chicago Bills, Amtrak, Pub 13 and many other businesses sponsored the outing. After golf and lunch on the course everyone made their way inside the Elks for dinner and both a silent and live auction. Auctioneer Freddie Immke volunteered his time for the live auction and was assisted by members of the Pontiac High School Key Club. All money raised will help with the build out of the Basketball Museum of Illinois. The City of Pontiac showed their support by having a city council member play in the outing. There are many business owners and volunteers in Pontiac that are excited for the build out of the museum to begin. Everyone is looking forward to and talking about the 3rd Annual Basketball of Museum Golf Outing in 2018.

Collinsville
On Friday, July 14 a golf scramble was held at Arlington Greens golf course in Collinsville, Illinois to raise funds for the Illinois Basketball Coaches Association Hall of Fame and Museum. It was the first of what is hoped to be an annual event. Twenty two four man teams participated including many former and current coaches, referees, and others associated with high school and college basketball. Lunch was served before the tournament and a dinner, auction, and awards after. Among those who offered brief remarks were Rich Herrin, Harry Statham, and IBCA executive Jim Tracy. The tourney was hosted by HOF members Rich Essington, Dave Shanahan, Larry Graham, Ray Wesley, Ken McBride, Steve Porter, Rick Moss, Mike Devening, Bryan Wilkinson, and Dennis Schickendanz.